Nutrition of Snails I 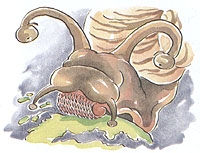 Snails or gastropods are a group rich in species and in variety, which along their long path of evolution developed a large variety of methods to find food and to feed.

Generally best known is what herbivorous slugs, such as the Spanish slug (Arion vulgaris), the garden slug (Arion hortensis) and field slugs (e.g. Deroceras agreste), can do to our gardens. But at this point one has to understand already that certainly not every land snail species is made of herbivores, and that even those are not all pests in cultivated land. Looking at snails in general that is even more true.

Snails have neither mouthparts like a crab nor teeth like a mammal. Instead, they use a specialised organ to feed that is called a rasping tongue or radula. This organ is specific for molluscs, though only some groups have one.

A snail's rasping tongue resembles a tiny shovel excavator: An elastic band, covered in microscopically tiny teeth is pulled over a gristle core (odontophore). By this movement, the radula toothlets rasp away food particles and transport them into the snail's oesophagus or gullet. But a snail not only uses the radula for feeding, but also to clean the shell aperture from slime residue, or to rasp shell particles from other snails' shells to improve their own. Especially then a distinct rasping or scraping noise can be heard.

The radula's function in snails (Gastropoda).

Only on pictures taken with an electron microscope, like done during a project at Salzburg University, it becomes visible that a land snail's radula teeth are not simply built at all, but intricately (

Enlarged view of a Helix pomatia radula). Also, not all radulas' teeth are built similarly - The rhachis teeth in the middle are built differently from the lateral teeth at the sides.

Additionally, apart from all similarities the differences between the radula displayed of Helix pomatia (the Roman snail, an exclusive herbivore) and Arion vulgaris (the Spanish slug, a facultative scavenger, see also: Snails and slugs - Terror of the Gardener?) are obvious: The radula teeth of Arion vulgaris are noticeably longer and more pointed.

In herbivorous snails the upper jaw located at the gullet's upper wall is used as an antagonist to the radula, so the snail can "bite" off plant parts. Carnivorous snails, on the other hand, usually do not have an upper jaw, since they usually rasp or rip their food with their particularly long and sharp radula teeth..

Today, it is relatively well established what snails like to eat. Herbivorous snails and slugs eat almost all parts of plants and mushrooms. Depending on the species of snail or slug,  either fresh or withering parts of the plant are preferred. So not all garden snails and slugs exclusively feed on fresh plants, many of them prefer withered or dead leaves. One of those, for example, is the Roman snail (Helix pomatia). One of the causes might be that generally in withered plant parts there are fewer repellent agents than in fresh ones.

Besides, studies have also determined that snails are especially attracted to pheromones plants emit when they are already harmed by herbivory or another kind of damage.

Especially small snails, many tree- or rock-dwelling species among them, mainly feed on algae and lichen growing on bark or rocks. Some of those are many door snail species (Clausiliidae), but also bulin snails (Enidae) and cheese snails (Helicodontidae).

Many snail species also have an important part in propagating plant species by feeding on them. This is called endozoochory. It takes place, for example, in snails whose diet contains lichen. The snails, mostly tree-dwelling species, rasp away at the lichen and swallow them. By chance, some fragments manage to pass the sail's digestive tract unharmed and then are defecated. From those cells then new lichen can develop, which are also been dispersed by the snails outside of their own area.

Many snail species also feed on decaying wood and withered leaves, among them the operculate land snails of the Pomatias genus (e.g. Pomatias elegans). Not only those have symbiotic bacteria in their digestive system helping them to digest cellulose into sugars.

Among snail species feeding on mushrooms there are many slug species, such as the forest-dwelling black keel back slug (Limax cinereoniger), the largest Central-European land gastropod (

also see Limax cinereoniger feeding on a mushroom!). Snails also not only feed on the fruit bodies of mushrooms, but they also eat earth and the mycelia within.

What do snails eat?

Many terrestrial snail species are not exclusively herbivores, but also facultative scavengers who sometimes feed on other snails' eggs or dead snails. So sometimes there are unusual observations to be made, such as a tree snail (Arianta arbustorum) feeding on a dead earthworm. A similar behaviour has been observed with common brown garden snails (Cornu aspersum) or with most giant African land snails (Achatinidae).

The view of several round-back slugs (Arionidae) feeding on a dead member of their kind, is rather common. And in fact slugs like that fulfil an important task in nature of the health police disposing of decaying organic matter. That is why usually a lot of slugs can be found in and around compost heaps.

In those slugs, as we could observe in Spanish slugs (Arion vulgaris) some time ago, the border to carnivorous behaviour is rather fluent (see: Slugs and the Variety of Food Sources). While those slugs had been assumed to be scavengers earlier, in the meantime it had been proven that they also actively hunt and eat other snails.

Not only carrion but animal faeces as well is an important food source for many of those slugs.