The Black Keel Back Slug

The largest European land snail is the black keel back slug (Limax cinereoniger). It may be longer than 20 cm (8 in.). However, it is its smaller relative, the grey or tiger slug, which was given the scientific name of Limax maximus, the largest or very large slug. Besides, the black slug is not always black. In contrary, there are many grey, even light grey, specimens to be found.

Limax slugs can easily be distinguished from other slugs, such as the round back slug Arion. A Limax's body is much more slender built and their respiratory hole is found in the rear half of the mantle shield. Besides the foot's backside shows a prominent edge: The keel. But among Limacidae, it only goes over about half of the slug's back, not all of it, as among Milacidae slugs.

Limax cinereoniger's keel is even easier seen, as there is a distinct white stripe along it.

There is also a possibility to discern Limax cinereoniger from its smaller relative, Limax maximus, as both may as well be grey or striped. The white back stripe is characteristic for Limax cinereoniger, and so is the two coloured foot sole, which is black at the sides and white in the centre.

Limax cinereoniger is almost exclusively a forest dweller, in contrary to Limax maximus, often found as a commensal ("culture follower") species in cellars and anthropogenous areas.

The black slug feeds on algae and mushrooms and so also often is found on or beneath old fallen logs. Mating also does not take place as conspicuously as among Limax maximus: Two slugs hold to a branch with their tail tip and entwine their penes.

The juveniles are brown with an indistinct pattern. In contrary to the adult animals, their foot sole is unicoloured.

As already mentioned, the colour pattern of Limax cinereoniger slugs is very variable, in spite of their unambiguous name. As the following pictures show, colour may stretch from very light grey "ghost" specimens until almost completely black animals.

Nevertheless, the black keel back slug, even if it is not black, may easily be distinguished from other Limax species, thanks to its typical characters mentioned above.

The black keel back slug is much less common than the tiger slug and considerably more vulnerable to human influence of its natural forest habitats. It does, though, occur in almost all of Europe, albeit in a scattered fashion, with the exception of Northern Scandinavia, Iceland and the farthest Southern parts of the Mediterranean.

Limax cinereoniger, however, is not exactly rare. It is also easily recognized in nature due to its size and also easily distinguished from other black slugs its size, such as Arion ater or Arion lusitanicus (= vulgaris), by its slender body and keel.

Limax cinereoniger may become as old as three years, so like other keel back slugs, but unlike most other slugs, it is able to survive the winter season. If there is a lack of conspecifics or mating partners, the black slugs is also capable of auto-fertilisation. 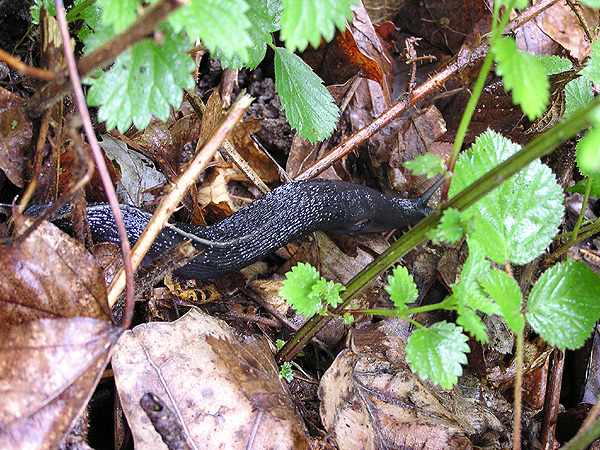 Different colour varieties of the black slug (Limax cinereoniger). The specimens displayed are all from the same area of finding spots. [RN]

Very interesting red specimens Martina Eleveld has found in Lower Austria: The reddish colour with black and white stripes first suggested an unknown species. Besides, there were also one-colour reddish specimens. A view of the foot sole with the characteristic black-white-black pattern, however, revealed the identity of the black keel back slug (Limax cinereoniger). Also there was the characteristic whitish dorsal stripe in all specimens.