Snails and Slugs – Terror of the Gardener? 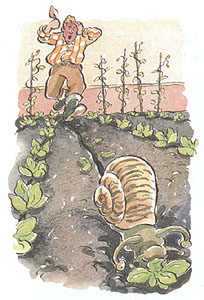 Most people's knowledge about gastropods is limited to snails being a garden pest. To save the truth about them, one must admit that a garden in the early morning hours bears about as much attraction to gastropods of different kinds, like the village pub on Sunday morning after church. Gardens are paradises full of tasty green plants with good moist earth loosened up where so snails and slugs can lay their eggs. its the snails' heaven on earth.

One thing is for sure: A particularly annoying garden visitor is the Durham slug or Lusitanian slug (Arion vulgaris), which introduced from the Iberian peninsula has pushed away and replaced the original domestic slug species by superior breeding successes and besides is notorious for moving long distances on the search for food. The result is the sheer numbers of Arion vulgaris make it a garden pest.

There are also other slug species, like the netted field slug (Deroceras reticulatum), the garden slug (Arion hortensis) and some snail species as well, that can reduce a lettuce bed's outcome to almost nothing.

What there is to do then? Most garden owners know no mercy and swing the chemical club. With all methods they try to overcome their slimy visitors, by hacking them in two with a spade, poison them with snail pellets, salt them or even coffee them – all very barbaric methods, come to think of it.

There are, however, differences between a regularly designed garden and a so-called bio-garden. Bio-gardens, like they appear today to an increasing degree. Remaining close to nature, bio-gardens allow living spaces or habitats to a much larger variety of plants and animals. And the amazing result is: Leaving nature its way, many problems are (almost) solved by themselves.

Nature knows many methods to cut its losses because of slimy lettuce eaters. Many animals, for one hand, hunt the slimy crawlers down. There are hedgehogs, blindworms and the common toad, there are shrews and moles. (Also see: Terrestrial snails' enemies).

All those members of the domestic fauna usually eating snails are banned from the regular ruler garden, as well as should be the snails and slugs. Moles make disgusting molehills; the toad was driven over on the nearby road, and be honest: Who ever has seen a blindworm?

The problem is: Most cultural landscapes stop nature from regulating itself. This is why vermin invade, against which agriculture has to produce an arsenal of chemical weapons. Or does it not?

Luckily there are some ecologically feasible methods of limiting the slug problem. Poisoning one's garden is not among them. Poison is unselective. It poisons the prey as well as the hunter (including, by the way, the gardener, thinking of it).

To fight against snails and slugs, there is once again Sun Tzu's old saying "Know thine enemy!". Slugs usually have got a resting place in a protected position, from where they migrate to their feeding grounds in the evening. That means, the goal is to stop them from doing so by barring the way. That is done best by building a fence or wall the top edge bent, best made of metal, which gastropods do not like to crawl over. Note that a fence from wire mesh is good to stop snails, but slug will be able to squeeze through; that is one of the reasons that they became slugs in the first place! Also it is wise not to have plant parts hanging over the fence, so the slugs can climb over them – they will!

Gastropods like humidity. Usually they are active in the evening. That means watering plants in a singular manner, so there are dry places between them. Watering is best done in the morning, not to produce even more attraction to the waiting slugs. One could even surround the plants with sawdust to make it more difficult for slugs to reach them.

Concerning working the earth, hacking in autumn is out. The freshly dug out earth makes it even easier for snails to lay their eggs. Hack in the spring, and you will also destroy at least some egg clusters.

Keeping slugs away will not work, if you cannot get rid of them in the first place. To do so, they have to be picked up and put away. That is easiest, if the slugs can be convinced to gather in one place, for example by giving them a protected resting place, for example by laying out some wooden shelves, under which they will retreat. Then they can be easily collected from one place. Also an alternative food source is good, such as bran or oatmeal. There is also the possibility of putting out beer traps. Snails and slugs, as well as one ort he other human, will not be able to resists the beer and fall to sleep where they are, only to be picked up.

Gardens left to nature not only are a resort for toads, blindworms, hedgehogs and moles, so that the gardener has valuable allies against slugs. But on one hand there will be arguments with the neighbours because of the mole hills in their gardens, and on the other hand those animals are so rare today, one will possibly not find them in their garden anyway.

There are, however, ducks and chickens. Both eat snails and slugs, if they are able to. Running ducks carry slugs into the water to eat them there. A reasonable garden pond, though, is a prerequisite. In Austria there are several ecological projects that have to do with running ducks.

There has been an ecology price for the "Rent an Ent" idea. Though the English is terrible and reminds of "Lord of the Rings", it essentially means "Rent a duck" ("Ente" in German means "duck"). Some running ducks – a domesticated version of the Indian penguin duck – can keep the garden free of snails. Renting the ducks to other gardens may even produce a little profit.

In addition to those measures there are about as many ideas how to get rid of slugs, as there are gardeners. One will say chamomile would keep the slugs away, whereas the next swears, chamomile would even attract them. That means, everybody has to try their own experiments.

The discovery that mosses (Bryophyta) and liverworts (Marchantiophyta) possess very efficient repellent agents against slugs, makes it largely unnecessary for gardeners to distribute poison. The Bonn professor Jan Peter Frahm discovered that mosses contain secondary plant agents, which repel slugs, but do not kill them. He examined two species, a moss (Neckera crispa) and a liverwort (Porella obtusata).  In an alcoholic solution, both had strongly repellent properties against slugs, the liverwort about ten times as efficient as the moss. Distinct feeding repellence against the Spanish slug (Arion vulgaris) could be determined even in a solution of 0.25%.

Moss extract for an application in the garden in the meantime are commercially available.

In summary I would like to hope the reader to have understood that it is not necessary to poison the environment to get rid of slugs. A garden in accord with nature is much less susceptible to slugs, than an artificial ruler garden. Besides, it is much more beautiful to look at.