Grass snails are tiny snails with a "helix shaped" shell (Geyer 1927) with a diameter of less than 3 mm. Glass snails, as their name says, mostly live on meadows, under stones and in moss. Acanthinulas also under dead wood and in the duff in woody places. Their intricate surface structure is quite special for snails this size, as is especially well visible in two of the three species described.

The vernacular name "grass snails" in not a generally accepted name, but simply translated from German. Usually the snails of this family, which actually does not have a vernacular name, are referred to as Vallonias and Acanthinulas or simply as snails.

Description: The disc-shaped shell of a ribbed vallonia is coloured yellowish white to light horn colour. It has a very flat spire and is widely ribbed. The whorls grow fast towards the aperture: The apertural rim is curved outside so there is a wide white lip. When the ribs have been eroded by weathering, this snail species may easily be confounded with the unribbed species Vallonia pulchella, the lovely vallonia. But Vallonia costata has a flatter shell with a more oval form, a wider navel (umbilicus) and a more distinct aperture lip.

Habitat and Distribution: The ribbed vallonia lives on meadows, also in gardens, under stones, in the grass and duff at the foot of rocks, also in drier places, like sand hills. The species is found very frequently and distributed in the holarctic (see Faunal provinces of the Earth). It is also more adaptable to ecologic changes than Vallonia pulchella, which it why it usually is more frequent than the latter in high altitudes. In Switzerland it can be found as high as 2800 m MSL. In the north of the British Isles, Vallonia costata is mainly found in coastal regions and only rarely in the highlands.

In Schleswig-Holstein Vallonia costata is found in dry meadow habitats; due to the destruction of those habitats, the species is calssified as near threatened (NT) (see also:

Description: The lovely vallonia has an almost circular shell, whose spire ascends slightly more than that of its ribbed relative. The shell surface is covered with very fine and irregular striae.The last whorl widens shortly before the aperture whose lip is slightly weaker than in  Vallonia costata. The snail's body is milky white, the tentacles are almost translucent.

Habitat and Distribution: The lovely vallonia lives in open meadow habitats on calciferous ground. It prefers swampy meadows and generally is found in more humid places than the ribbed vallonia. But also it may appear on sand hills, sometimes in dry meadow habitats and in rock gravel, but not in the forest. In swampy places, there may be great numbers of those little snails, which also are an important food source for other snail species, such as carnivorous true glass snails (Zonitidae). In alluvial deposits at the river side great numbers of this species' shells can be found washed up.

Vallonia pulchella is very widely distributed. Originally at home in the palaearctic (see Faunal provinces of the Earth) from North Scandinavia to the Azores, Madeira and the Canary Islands, it is not found in the north of Scotland; it is generally rarer in the north of Great Britain, appearing only near the coast. In Switzerland, Vallonia pulchella lives in altitudes of up to 2000 m MSL, but rarely beyond the tree line. On the British Isles ad in Scandinavia it is only rarely found in the highlands. In America the lovely vallonia is present from Newfoundland to the Canadian south-east and the American north-east, in the south as far as North Carolina, Kentucky and Missouri. In the meantime the species has been introduced to the Cap Verde islands and on Iceland.

Description: The spiny Acanthinula has a globular shell with a bluntly conical spire and a dark horn colour. The whorls are ribbed regularly and widely, the single ribs are extended to characteristic spines. This makes easier the camouflage with excrement and earth. Acanthinulas are ovoviviparous - the juveniles hatch in the mother's body and are born alive.

Habitat and Distribution: The spiny Acanthinula lives under dead wood and in the duff of forests, bushes and gorges. From North Africa the species has spread over almost all of Europe as far east as central Russia and the country beyond the Caucasus mountains. In Liechtenstein, Acanthinula aculeata lives as high as in 1900 m MSL, over 1200 m MSL, however, it becomes rare.

Threat Situation: In Great Britain the species' decline is caused by the destruction of its habitats by intensive agriculture. In Austria, it is near threatened because of the impact forestry has on its habitats. In Bavaria the populations of the spiny Acanthinula are also declining (see also:

Anderson, R. (2008): "An annotated list of the non-marine Mollusca of Britain and Ireland" (PDF). 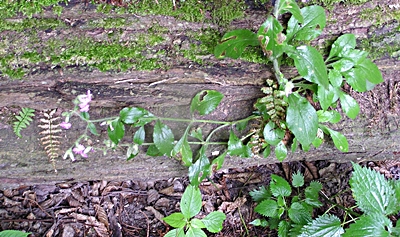 A fallen log - Habitat for spiny Acanthinulas (Acanthinula aculeata)  and many other snail species. [RN]