Explanation of shell characters as means of identification.

Bush snails are placed together with the leaf snails (Hygromiidae) and the Helicid snails (Helicidae) into one superfamily, the Helicoidea.

The family is rich in species and has got the distribution centre in Central and East Asia. There is only one species Fruticicola fruticum that is distributed into Western Asia and Europe.

Description: The bush snail has got a globular, slightly flattened shell, which is very variable in size. It is thinly walled and has got dense fine wavy spiral lines. The umbilicus is open (about one seventh of the shell diameter) and deep. The shell colour as its size, is very variable and can be from grey white to reddish brown and even violet. Varieties also come into existence when the soft body's colour shines through, as seen in the picture on the left.

Habitat and Distribution: The bush snail prefers alluvial forests and bright bushes, it is in need of warmth but susceptible to dryness. It appears in almost all of Europe, without the British Isles and the Northern and Southern border areas.

Remark: In Kerney, Cameron, Jungbluth (1983) Fruticicola fruticum is mentioned with the obsolete name Bradybaena fruticum, which still is sometimes used. 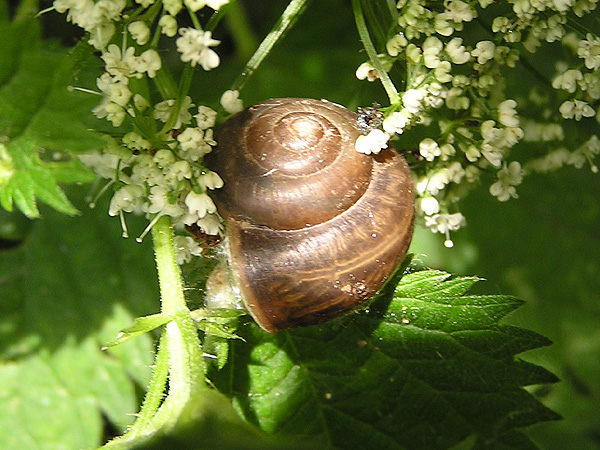