For a long time, the river mussel (Unio crassus) had been thought to be the most frequent European fresh water mussel. Today the species is severely protected and according to estimates, it must be thought to be extinct in 90% of its original distribution area. River mussels used to be found in large parts of North and Central Europe, with the exception of the eastern, southern and extreme western boundary areas.

River mussels grow to an average size of about 70 mm, but there are also dwarf forms of less than 60 mm shell size, as well as giant forms larger than 100 mm. The size a river mussel can grow to is largely dependent on the quality of the surrounding water. This includes, for example, nutrient supply, but also water temperature (with consequences for its oxygen content).

A river mussel's shell has the shape of a kidney. Especially older specimens' shells can be covered in a layer of limestone, iron or manganese, giving them a blackish colour. The umbones, usually recognizable near the connection between the two shell valves, in older specimens often are worn off corroded and where the shell skin (periostracum) is absent, they may be corroded. In juvenile specimens, the umbones still are well visible, and are recognizable by characteristic wrinkled folds.

A river pearl mussel's soft body is yellowish in colour, the gills are conspicuously yellowish to orange. The large inhalant opening ends in a rim with papillae, the exhalant opening lying above it has a smooth rim. The siphons in river mussels usually are greyish in colour.

River mussels are filtrators, living buried in the river floor and feeding by extending their long siphons and filtering the water for plankton and detritus.

River mussels can grow to old age, they may reach 30 years in Central Europe, in Northern Europe even 90 years are possible. Until a certain age a river mussel's years can be read from the growth rings on their shell.

Like most local fresh water mussels, river mussels also develop passing a parasitic larval stage, the glochidium. Glochidia in their development are dependent on a special species of fish, the gills of which they infect to develop into juvenile mussels. A river mussel's glochidia are about 0.2 mm in size and are released by the female in packets of about a thousand each. The overall amount of glochidia released by a female mussel during on reproduction period my amount to 1,000 to 56,000.

In the time of three to six days from their release the glochidia must have found a suitable fish to infect, otherwise they will die. As host fish for river mussels there may be different species: Minnow (Phoxinus phoxinus), bull head (Cottus gobio), stickle back (Gasterosteus aculeatus), and other species.

After about 20 to 30 days the glochidia fall of the host fish and after a metamorphosis change into juvenile mussels, which grow buried in the river floor. Only after one to three years they will re-emerge and change to the life of an adult mussel.

A further special form is the thick shelled Unio crassus maximus, which might possibly be another subspecies, originally described from Denmark, but also present in Schleswig-Holstein, Mecklenburg-Western Pomerania and Brandenburg.

The river mussel is among the most threatened native fresh water mussel species. The reasons for the threat to their survival are especially are caused by man's influence on the quality of water.
While the river mussel originally only had the otter (Lutra lutra) as an enemy, several neozoan animal species have proven to harm river mussel populations, among those introduced from America, the muskrat (Ondathra zibethicus), the raccoon (Procyon lotor) and the American mink (Neovison vison).

Besides, especially the excessive application of fertiliser in agriculture, and as a consequence the growing pollution of indigenous water bodies, as well as the growing introduction of sediment into the rivers decreases water quality. By the sediment washed into the river, the system of spaces in the river floor is clotted, with accordingly negative consequences for juvenile mussels. The water's growing nitrate content and the correspondingly low oxygen content lead to a higher mortality in juvenile mussels.

For reasons of fishery economy, foreign fish species have been introduced, which replace the indigenous fish species and, besides, are unsuitable as hosts for the river mussel's glochidia.

Because of this impairment, the indigenous populations of river mussels often are strongly over aged and, with the dying-off of old mussels, continuously decrease in number. In the meantime, river mussels are raised artificially and returned to the wild. 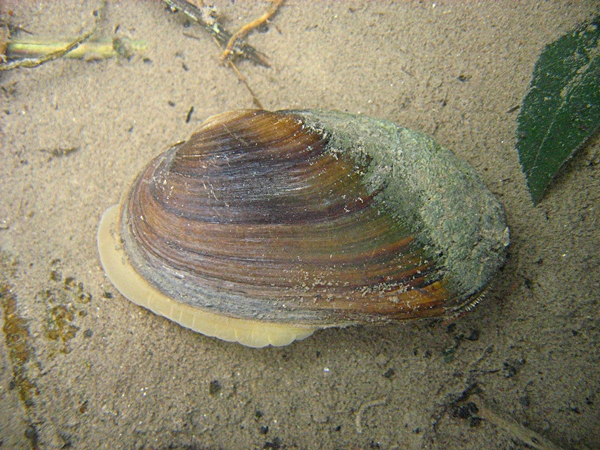