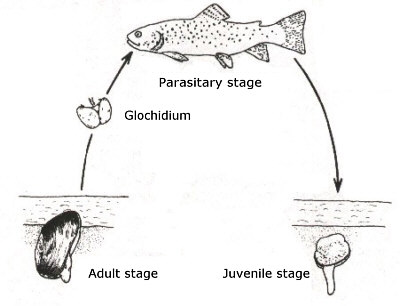 After fertilisation of their eggs, which mostly happens inside the female's body, mussels develop over several larval stages to form the juvenile mussel. While the mussel larvae do not resemble the adult animal, the juvenile mussels can easily be recognized as mussels. The various larval stages each come into existence by a metamorphosis from the preceding stage.

Sea living mussel species develop over the typical mollusc larval stages, the trochophora and the veliger larva. The larvae drift with the plankton and that way are distributed by the sea currents. The Unionoidea, large fresh water mussels, develop over a larval stage that is different from those of sea-living mussels.

The glochidium is a parasitic larval form, that develops from the fertilised egg. The fertilisation usually takes place in the female's gills, that among some mussel species may even be transformed into breeding chambers. By the exhalant siphon the glochidia leave the mother's body and sink to the ground. Glochidia have an average size of between 0.1 - 0.4 mm. The already have two shell halves, that can be closed with a closing muscle.

The glochidia having clung to the host fish's gill filaments, they are grown over by the fish's epithelial tissue. A capsule is built, the so called cysts. In the cyst the glochidia endure a certain time feeding on the fish's body fluids. The duration of the cyst stage is different. For example the glochidial stage of river mussels (Unio) spawning in early summer lasts 10 to 70 days. Pond mussels (Anodonta) on the other hand spawn in late summer and the glochidia stay inside the host's body until spring.

It may happen that host fish carry very many glochidia, they not only feed but also distribute. In fish cultivating plants a heavy glochidial infection may cause losses. Most large fresh water mussels, however, have become that rare, that a large infection by their glochidia is rather improbable.

The reason partly is that glochidia are very specific about their host fish. For example the river pearl mussel (Margaritifera margaritifera) depends largely on the brown trout (Salmo trutta fario). That fish only occurring in very clean and fast flowing creeks and rivers, makes also the large mussels only to be found there, for example in the Bavarian and Bohemian mountains.

The displacement of the brown trout by the imported American rainbow trout (Oncorhynchus mykiss) apart from the growing water pollution is one of the main reasons for the threatening extinction of the river pearl mussel.